◎ Why do we eat zongzi on Dragon Boat Festival?

The custom was originated from 340 AD, when the patriotic poet, Qu Yuan gave his life for his country by drowning himself in a river. To protect his body from being eaten by fish, people threw Zongzi into the river to feed the water creatures.

We will have a holiday from June 3rd to 5th and resume business on June 6th. 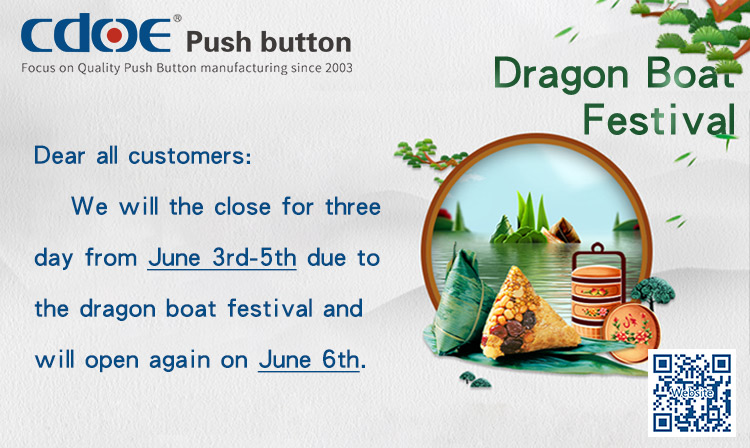 1.  What else do you know about the Dragon Boat Festival?

●The Dragon Boat Festival is a traditional festival of the Chinese nation, which has existed in our country for thousands of years. The Western Jin Dynasty “Fengtu Ji” said “the Midsummer Dragon Boat Festival. The end is the beginning.” This is the earliest origin of the word “Dragon Boat”.

●But what many people don’t know is that the Dragon Boat Festival also has the nickname of “Daughter’s Day”. From the 1st to the 5th day of May, every household dresses up the girls at home and folds a pomegranate flower hairpin on their heads. At that time, it was considered to be a ritual to avoid the “poison” of May and pray for the health of the girls in the family. Even if the daughter in the family grows up and gets married, she will go back to her parents’ home to celebrate the festival with her parents on this day. Therefore, the Dragon Boat Festival is also called “Daughter’s Day”.

2. What are the customs of the Dragon Boat Festival?

As the representative food of the Dragon Boat Festival, zongzi is said to be thrown into the river to prevent fish and shrimp from biting Qu Yuan’s body;Eating zongzi on the Dragon Boat Festival not only carries the feelings of home and country, but also contains the deep feelings of family and friends getting together and reuniting. Zongzi is known as one of the traditional foods with the most profound history and culture in China.

Legend has it that in ancient times, gods and water monsters agreed that as long as wormwood and calamus were hung in front of the door, they would not offend them. Therefore, people like to pick and hang wormwood on the Dragon Boat Festival, in order to disperse the demons and protect the family.Wormwood itself has the functions of dispelling cold and dehumidifying, warming the meridian and stopping bleeding. Its stems and leaves contain volatile aromatic oils, which can repel mosquitoes and flies and purify the air. The smoke produced when the leaves are smoked can inhibit the spread of viruses and bacteria in the air.

Qu Yuan threw himself into the river with hatred. The people of Chu State were reluctant to let the worthy minister Qu Yuan die, so many people rowed boats to chase and rescue them.Every year on the Dragon Boat Festival, the dragon boat race is an annual feast not to be missed. The sound of “hey yo” from everyone rowing in unison encourages the team members and also inspires the crowd watching the game on the shore.

The ancients would also wear sachets on the Dragon Boat Festival. In order to fragrant, repel insects, and avoid pestilence, the sachets were often filled with some traditional Chinese medicines with the function of “fragrance and defilement”, such as clove, angelica, radix, basil, mint, etc. , can refresh the mind, invigorate the spirit, pass the nine orifices, and prevent the plague.

Next new: What is the purpose of an emergency stop button?